Black and Yellow Batman Party. After 6 prior Batman Parties, we are getting to be pretty good at it!

My son has had 7 Batman parties! This year I decided to do all black and yellow, simple style decorations to make a cleaner, Batman Party look.

So, what did I make for our Batman party?

and drew the Batman symbol on the cups with permanent marker. Al though we ended up not needing cups at our Batman party, they looked great! 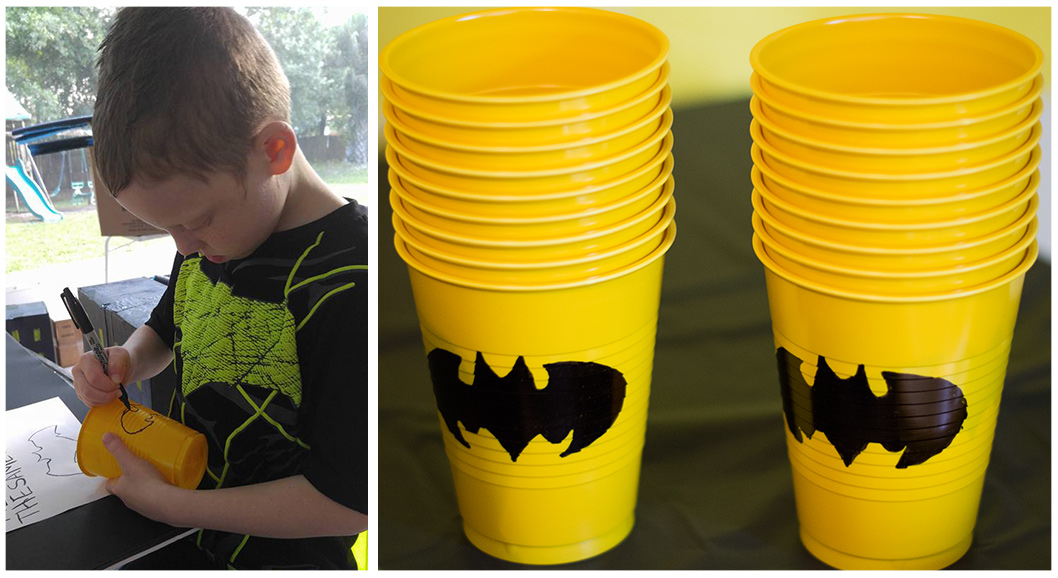 2. Black and Yellow Tissue Paper Balls: This is a really easy one and added great flare to your Batman party! All you need is a pack of tissue paper

• Unfold a pack of tissue paper, but keep all of the sheets together.

• Fold in half and cut the tips in your desired style. You can do them round or pointy. Un-Fold.

• Wrap a wire around the middle of the paper.

• Unfold the paper on one side.

• Separate each sheet. Do this very carefully to prevent ripping.

• Repeat on the other side. 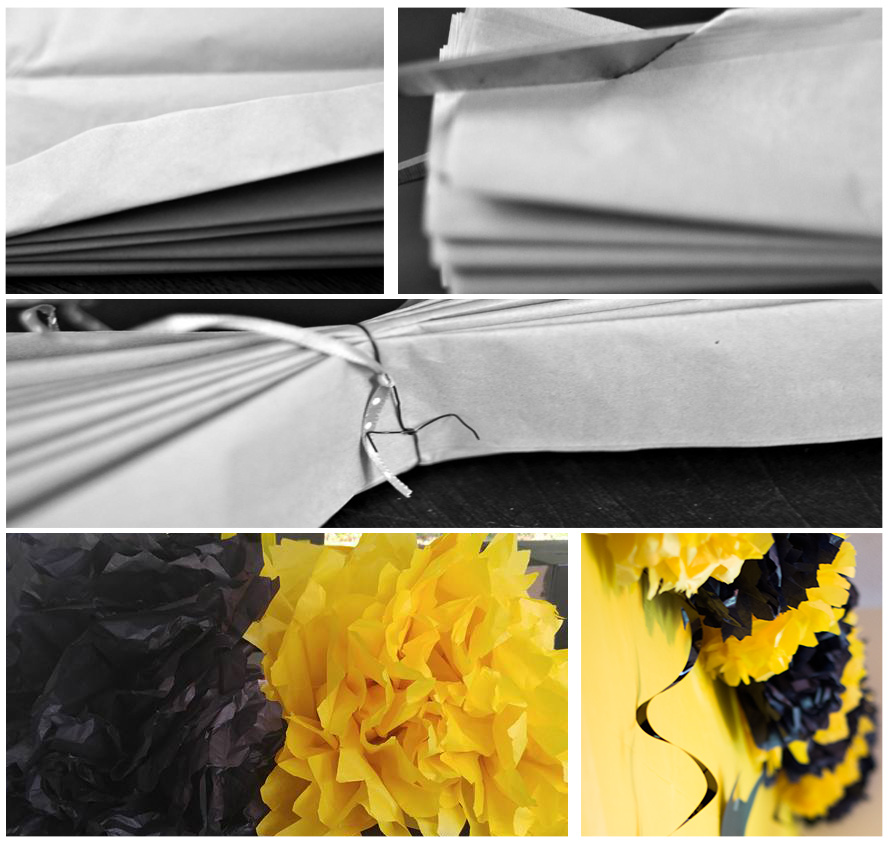 3. Batman Buildings for Gotham City: Its not a Batman party with out a city to protect! This was easy too. We saved boxes for about a month. We painted all of the boxes with black glossy paint. Then we added windows by painting yellow rectangles onto the boxes. We also cut a poster board in thirds and painted yellow dashes down the middles to make a road! 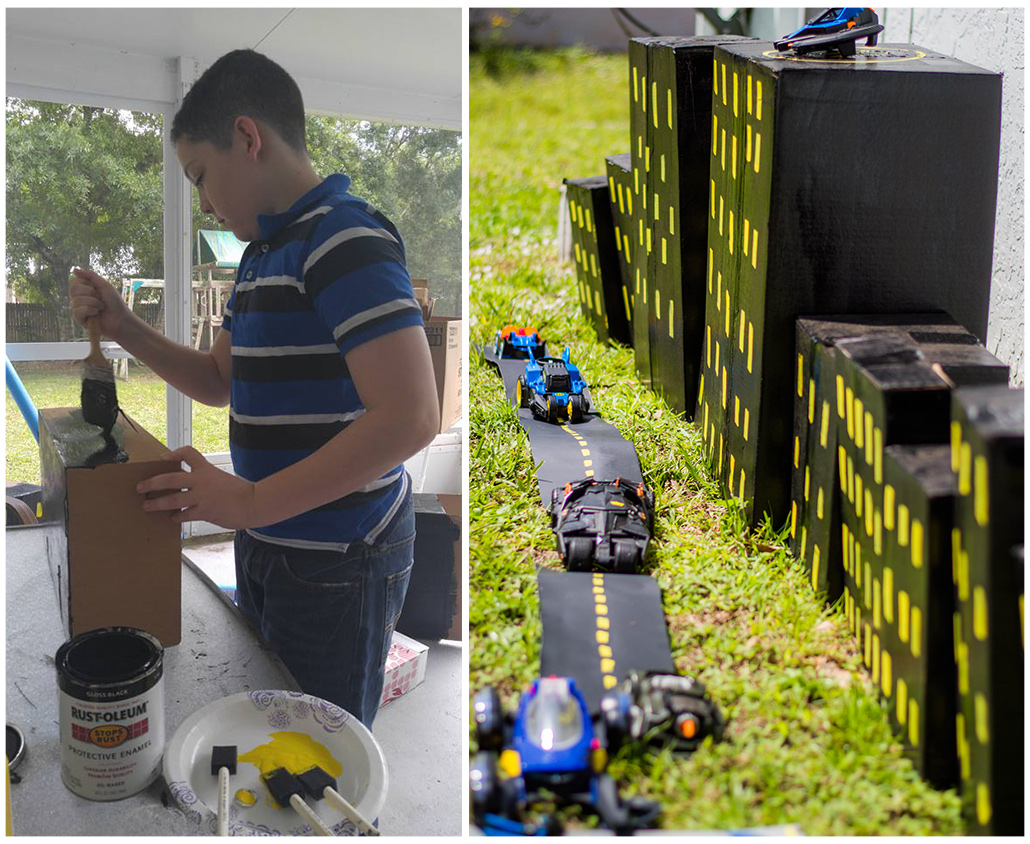 4. Onamonapias:  I bought these little starburst type signs at the dollar store, handed my son a permanent marker and a list of onamonoapias and let him go for it!

5. Cupcake Stands: This was a last minute idea. I was setting up the table and the cupcakes were boring me. So, I looked around and grabbed a wine glass, some candles and some vases. I took an extra black table cloth

I had and wrapped it around each of the items, cut the table cloth and stuffed it into the item. I sat each item down on the table and put a cupcake on top! Then I used one of our box buildings as a cake stand!

! I wanted a clean yellow and black Batman cake. One thing I don’t even try to do is cake decorating…not my niche! So I spoke to a local woman that bakes in her home. 3 years ago, I ordered a cake through a lady who bakes out of her home and she delivered a perfect cake. So, I figured I would do this again. I send this lady a picture of this Batman cake I want. She says, I can do that! She let me know she does everything with frosting, no fondant. So, I expected it to be not as perfect as the picture, but close….I have seen many cakes made out of frosting look just as good as fondant but they taste better! So….10:30 pm the night before the party I get a picture….I was very upset. This lady did not understand why I was NOT paying $50 for this cake! I have no problem paying $50 for a cake…but not this cake. Also, in the background of this picture I could see a messy dinning room table and the store bought frosting she used! Okay, I don’t have to continue on this story, just see the picture below. I think it should be clear which one I wanted and which one she made… 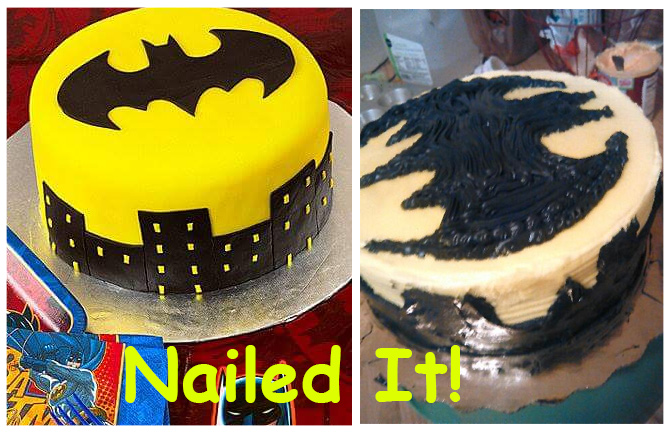 This lady makes beautiful baskets for all types of occasions…she should not tell someone she can bake because it seriously stressed me out the night before the party!

on the cake cutter and smoothed out the bat symbol after I drew it. If the lady who was baking my cake showed me an in perfect bat like mine, I would have been okay with it! But it was a little extreme and she wanted $50! I did not attempt the buildings on the side, I kept it like this… 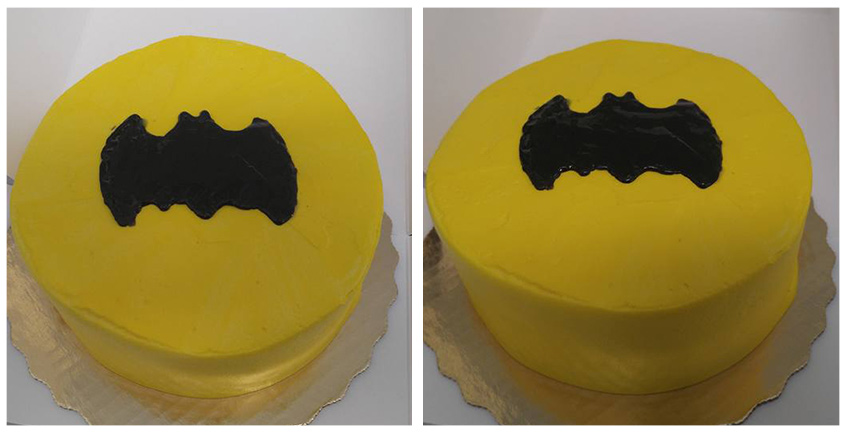 7. Batman Signs: I made a few signs to put around the Batman party. They aren’t professional by any means but they cost me a $1 each and added some style!

8. Batman Table: I always have one table set up with our decorations on it. I put a black table cloth

on the table and around the table front. I taped the onamonapias on the front black table cloth. Then I took a yellow table cloth

and put it on the wall behind the table. I put our tissue paper balls on tops of the yellow and my batman silhouette in the middle. I’m not super happy with my pictures of this table but it was super cool looking!

9. Batman Style Rice Krispie Treats: This was an easy one. I had much bigger plans for these but I ran out of time…So, I bought pre-made Rice Krispie treats

and dipped them in yellow melting chocolate

. Then I took my black frosting

and drizzled it back and forth on top. I originally bought a batman symbol cookie cutter

and was going to do them homemade and make bats…but I didnt! 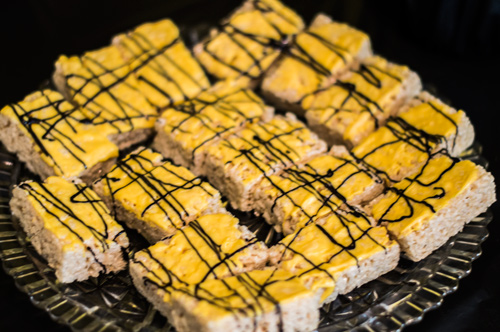 10. Face painting: I wanted a bunch of little super heroes at our Batman party so I had the parents tell me what their kids wanted to be and I did some quick face painting

. Face painting is a super easy thing to do, you should try it! 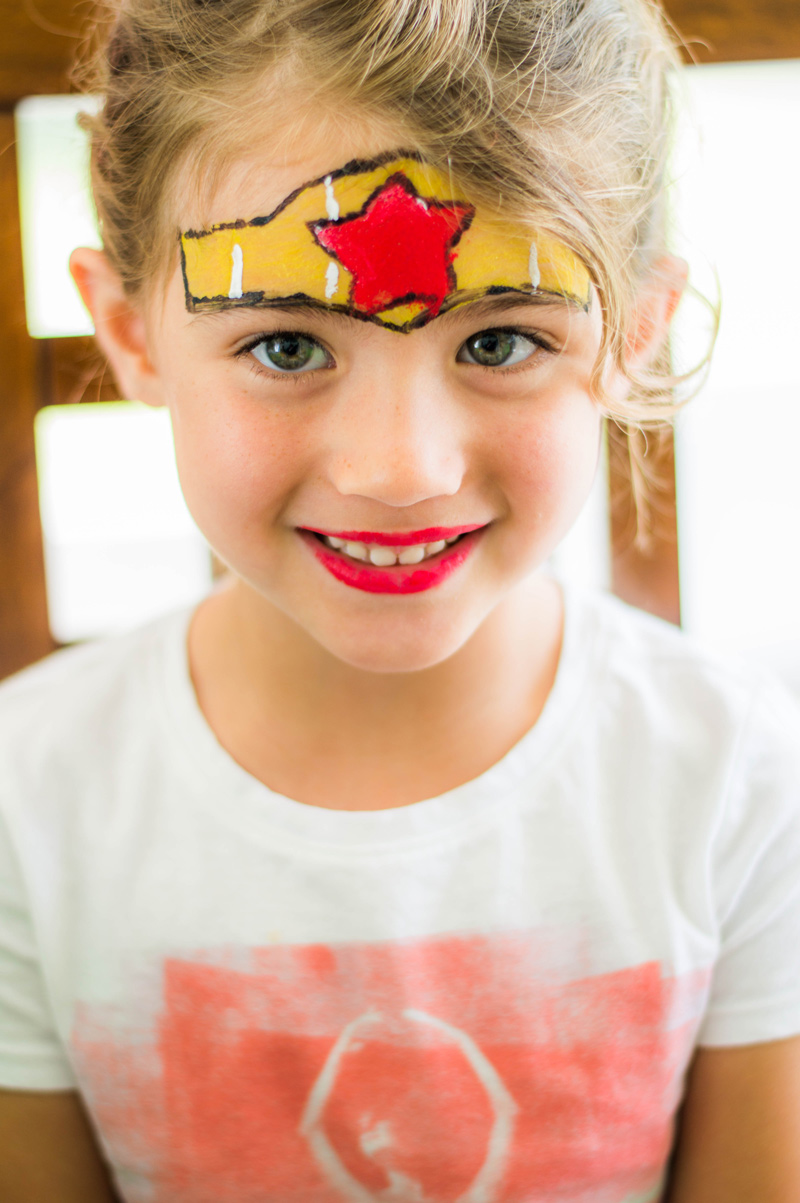 to wear to his party. He loved it and was acting just like Batman, standing up high watching over the “city”. He is a gymnast so I am used to him being in up high, scary places…the kid has impeccable balance and super human strength! 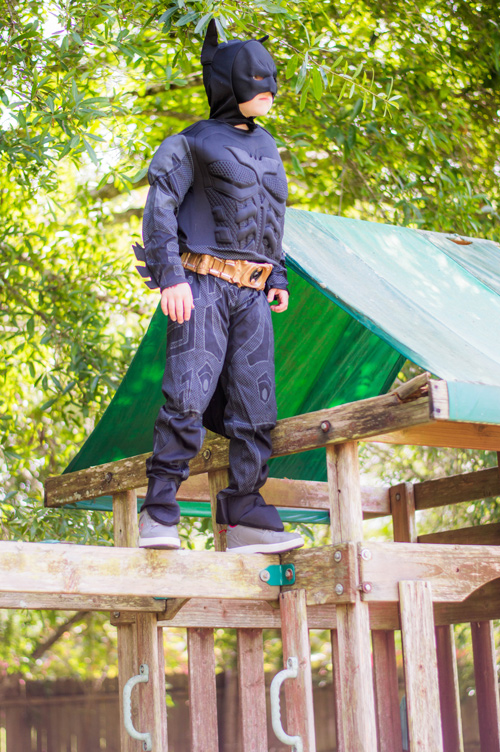 12. Batman: Okay, the best part…Batman! Yes, Batman came to our Batman party! My son told me to turn on the bat signal

that we bought and he would come out as if he (Batman) saw the signal and showed up. He came out and we had him “meet” the kids….then around the corner came the Real Batman….Look at my son the moment he saw Batman walk around the corner…. He fell into his brother and had no idea what to do next! 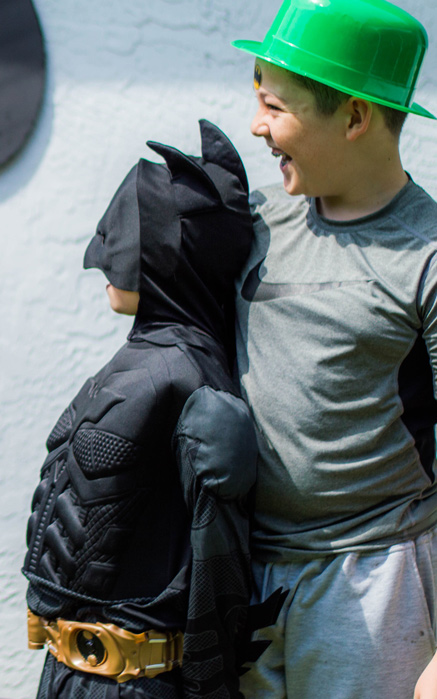 I cannot say enough good things about Marvelous Events. I met a wedding officiant on 2/14/2015 at a wedding I was shooting. She was running around that wedding like she was the coordinator. She came right up to me and confirmed that I was the photographer and told me who each person was and I told her she was doing much more than what a typical officiant would do! Since then she constantly refers me to new customers. She took the plunge and opened Marvelous Events and is now being paid for the things she was doing anyways! It is amazing what she can do to even the simplest venue! Anyways, when my Batman fell through last minute, I posted on Facebook looking for any Batman I can find and she told me her husband does Batman! 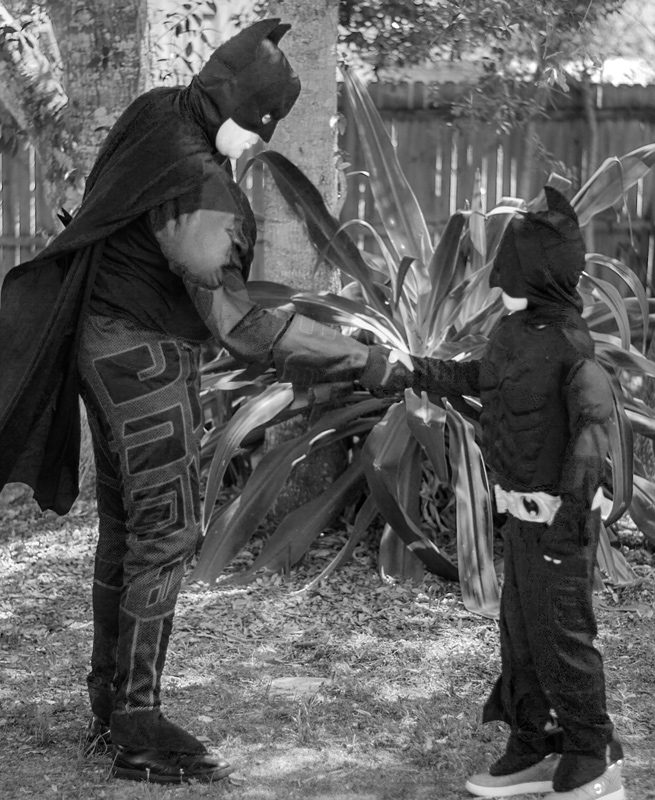 Marvelous Events provided us with a Batman who came in full character. He knew the answers to my son’s questions and had the perfect Batman voice the whole time. He followed my son around and my little one just did not know what to do with himself! 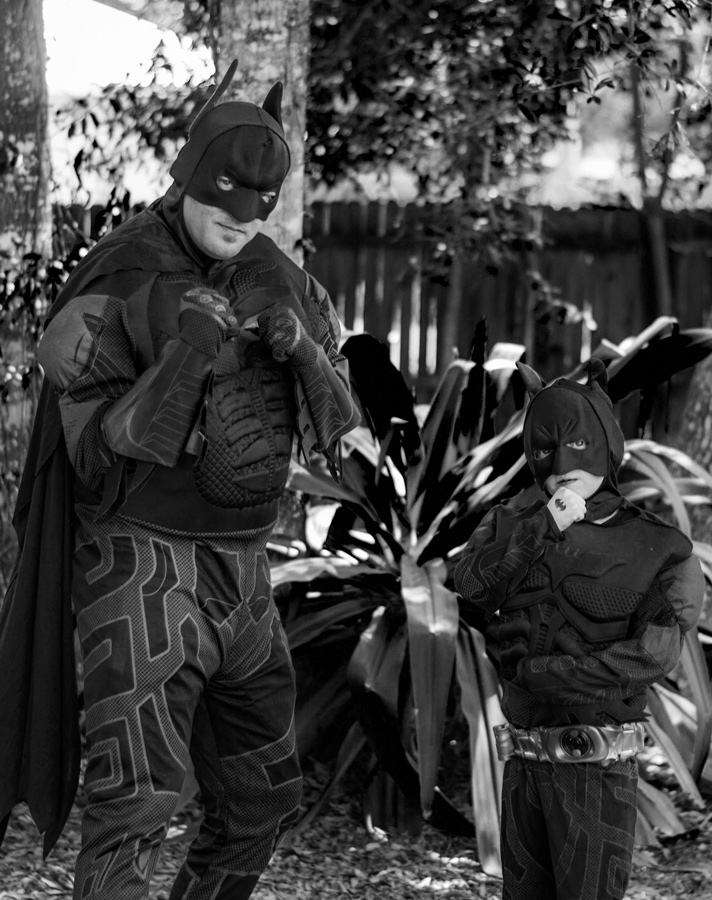 Then when he left, he ran away as fast as he could so when my son went to the side of the house to see him, he was gone! Now my son thinks he must have used a grappling hook to leave so fast! 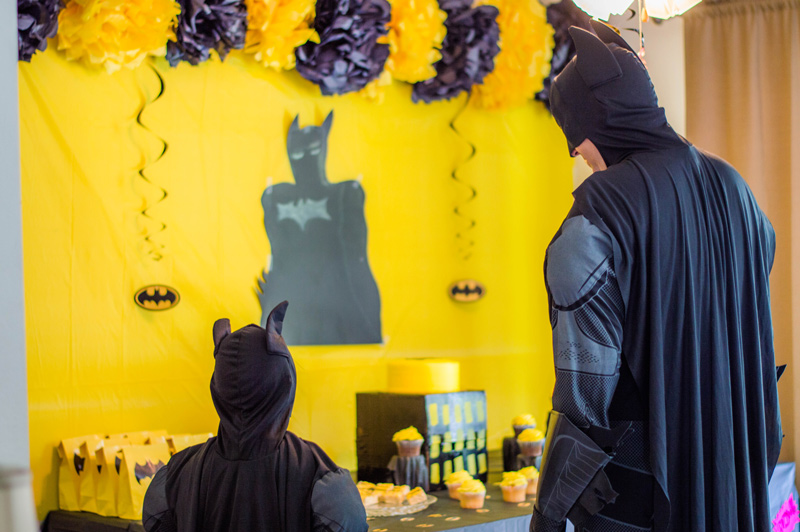 13. Party Games: I almost forgot about games! I bought a pin the emblem on the Batman. We also made a fun little water game. We punched a small hole in the bottom of two of our Batman cups and ran fishing wire through them. We tied the fishing wire to a fence then ran it to metal poles I had in the garage. I bought little water shooters from the dollar store and they had to shoot the water at the cup and who ever got to the end first won! 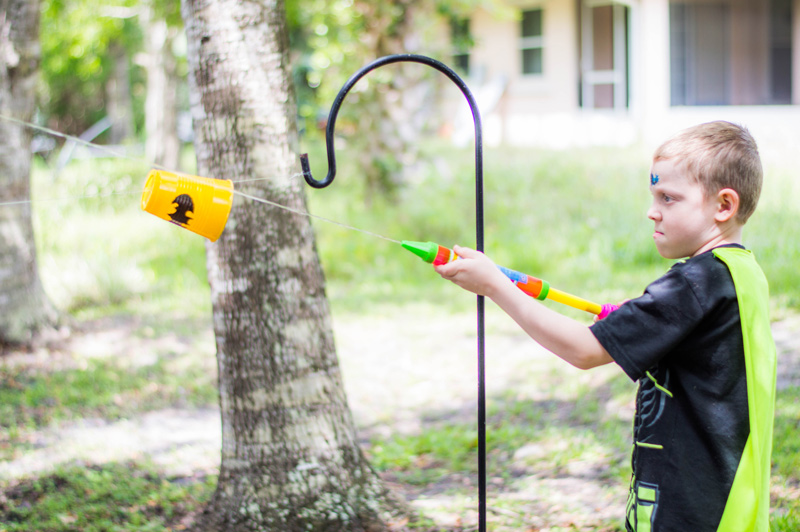 All in all, it was a great party! Almost everything was made at home and that is my favorite part. Not only does it show the kids how hard I am willing to work for their special day, it also saves a ton of money and is fun to do! 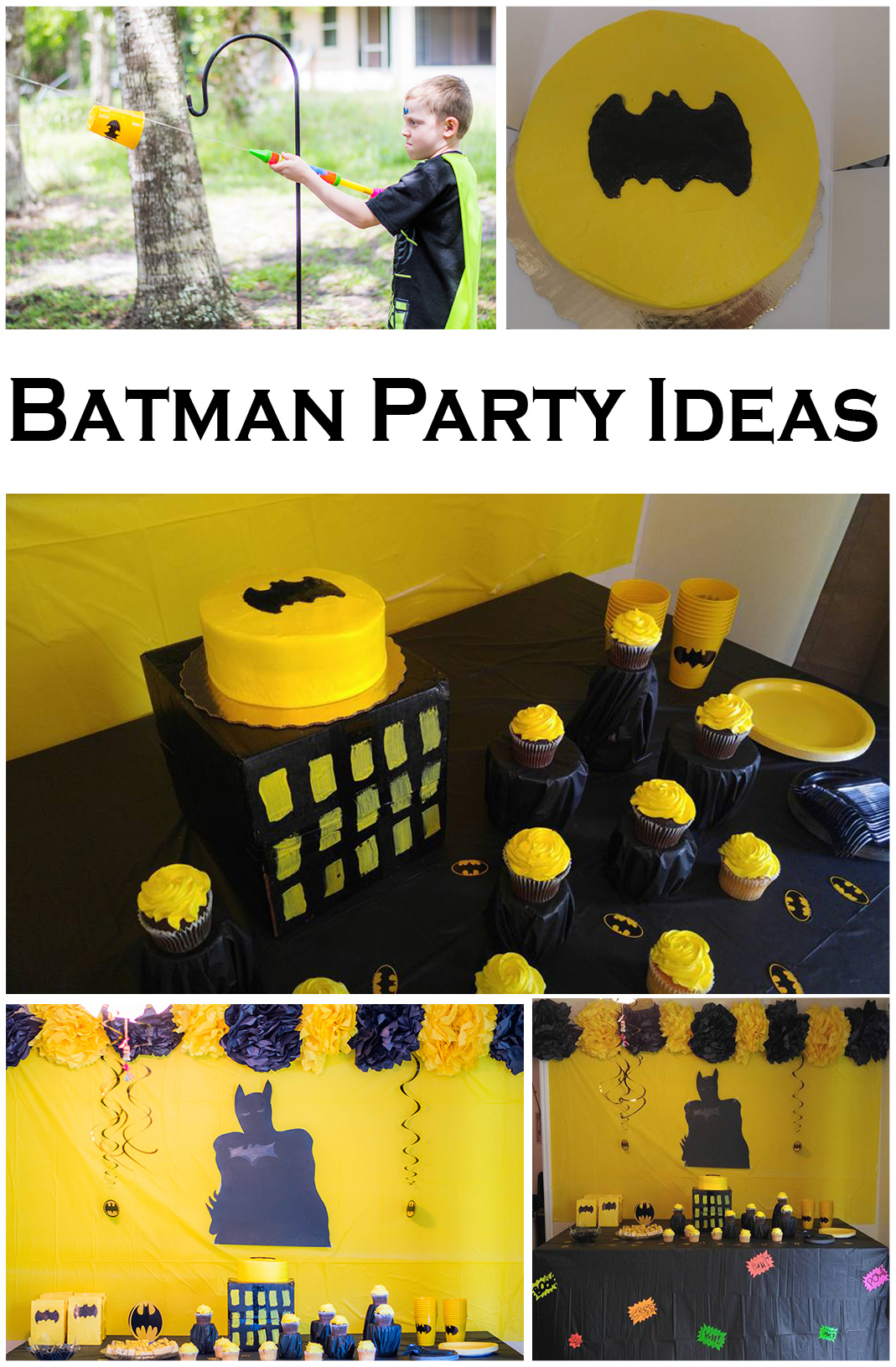 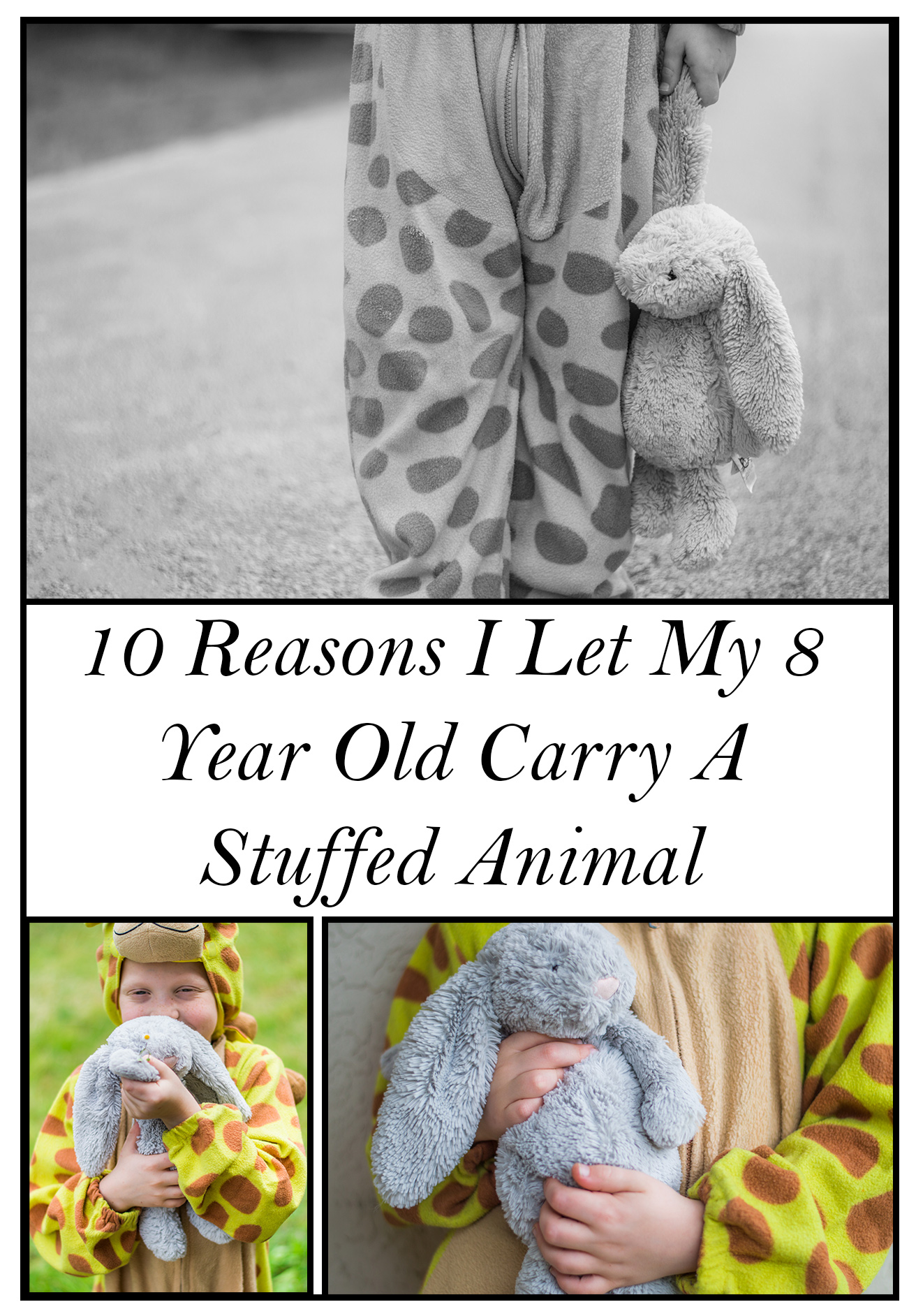 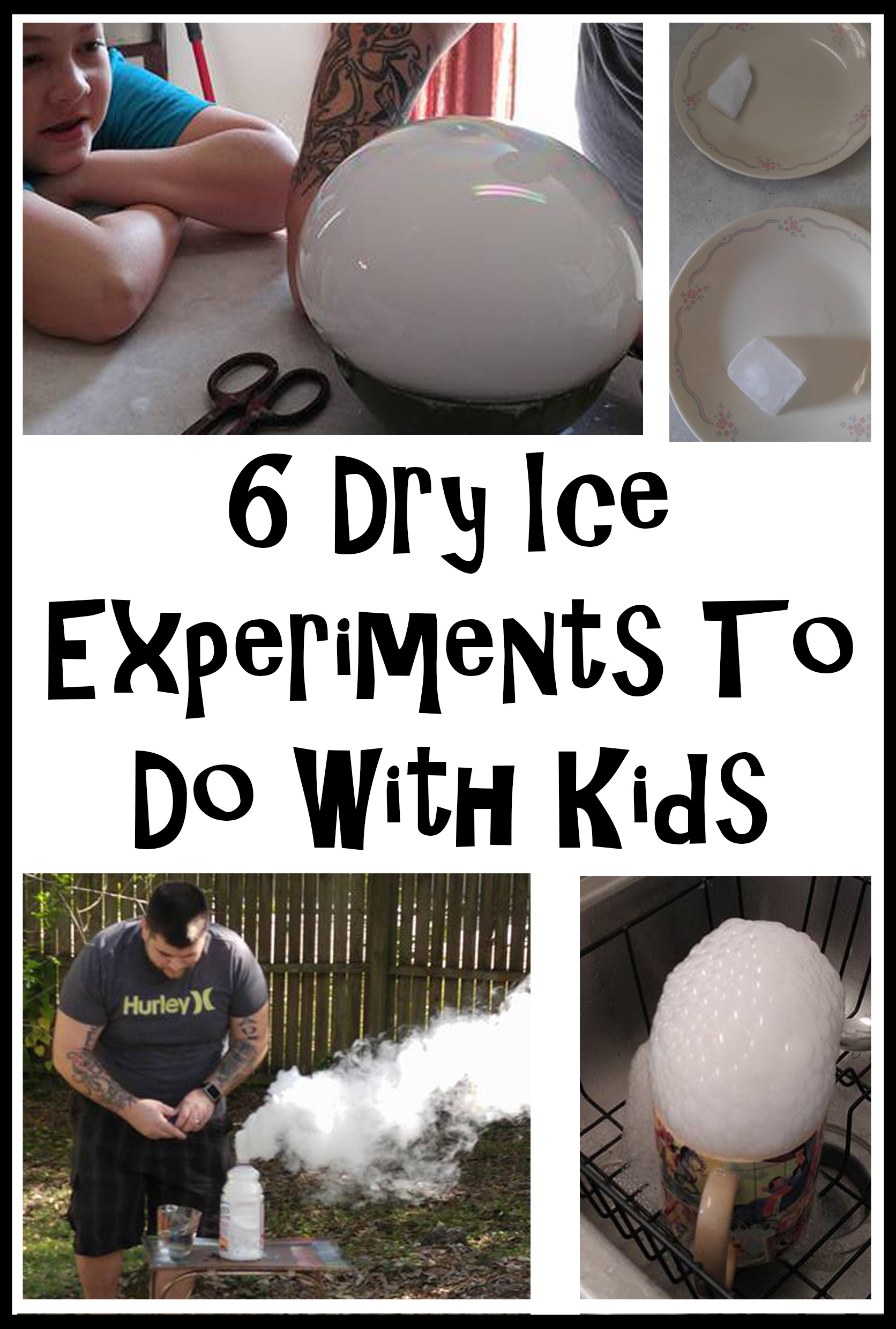 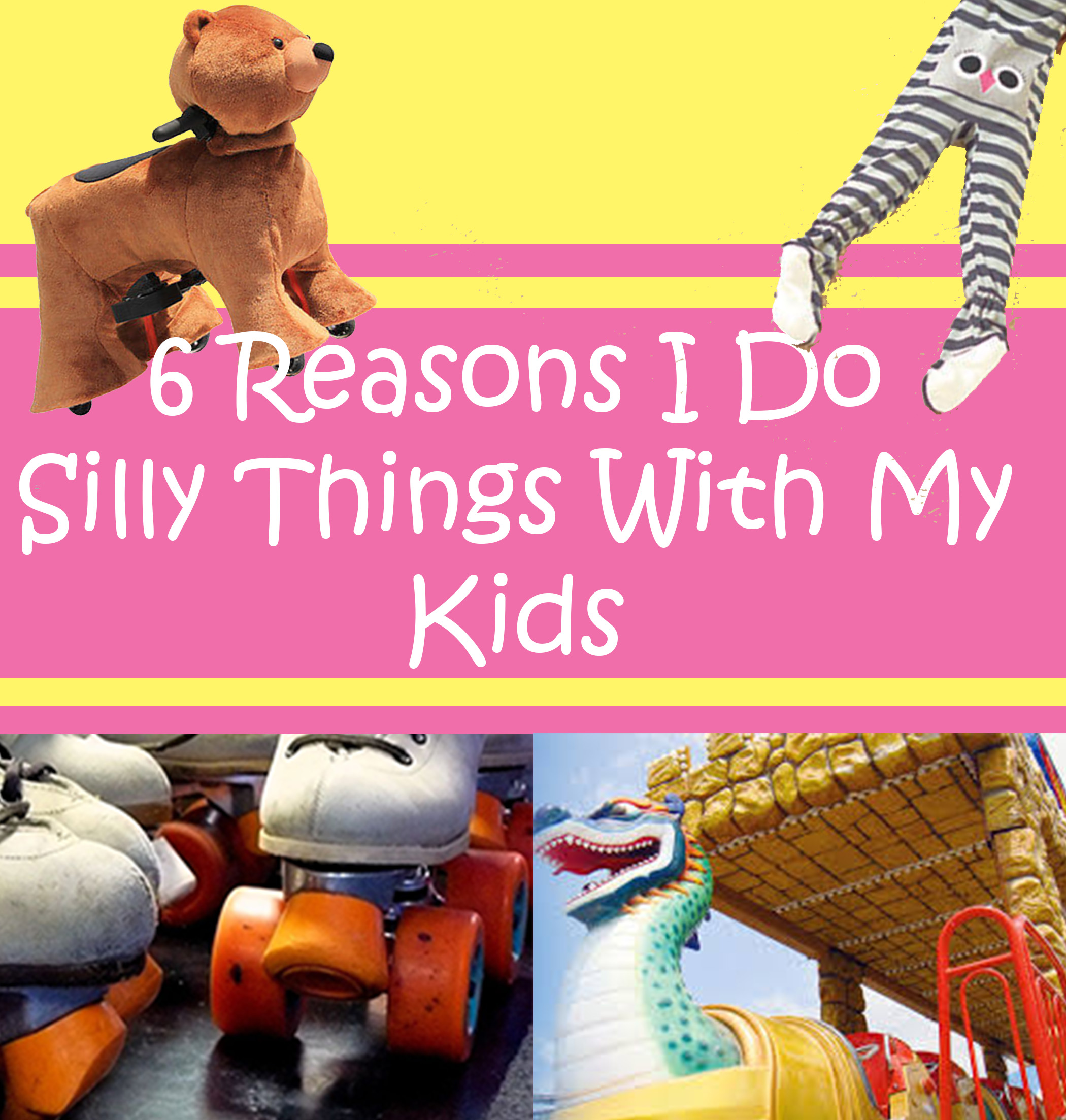