The Orlando Shooting
A Christians Rant

The Orlando Shooting - A Christians Rant. It may not sound very christian, but these people are idiots! How can anyone feel anything but saddened from the Pulse night club shooting in Orlando! 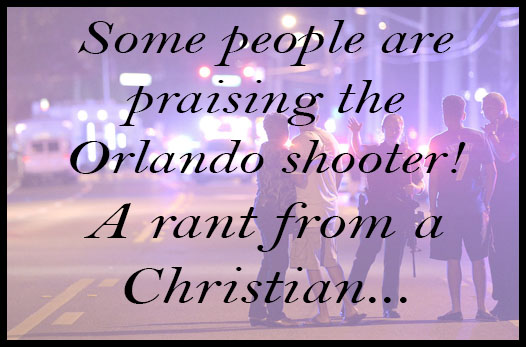 Before you start…please check out the Gofundme page and your local blood drives that are contributing to this devastation. Then, come back and get pissed off with me!

Are you sitting down? You should be and here is why…some people are HAPPY about the mass shooting!!!! Yes, happy, I told you to sit!

Saturday Night, Sunday Morning; 2am, Omar Mateen opened fire at the Pulse night club in Orlando Florida. He killed 50 people and injured 53. Really, that’s all anyone needs to know to place their judgement on this idiot. I could care less that he is 29, from fort pierce, Muslim, parents from Afghanistan bla bla bla. I also don’t give a shit whether he shot and killed people at a gay club, straight club or doggy club!

Here is what I do care about, Omar Mateen, shot 103 people leaving 50 dead and 53 injured and at least 200 others with lucid, ugly memories of the worst night of their lives. The one single positive here, the cops killed him on the scene. No court, no judge, no jury.

The one single positive here, the cops killed him on the scene. No court, no judge, no jury. Click to Tweet
He was sent to his death where he will receive his final judgement, the only one that matters!

Wait, did I just reference God in heaven….yes I did, that makes me christian! I love Jesus with everything in me! I believe in the bible, heaven, hell, Jesus as my savior etc…So why am I not happy about this event. Because I am christian…the real kind. Not the kind of christian that uses the bible to judge people but don’t really know anything about it and hide behind a beautiful religion to justify their self righteous actions…those people are not truly saved christians. They are just out there ruining the title, christian!

Here are the thoughts of christians who actually feel, love and understand Jesus Christ.

Soooo, hopefully I have made it clear that this whole, Gay people are bad people or less significant or whatever bullshit you are pulling out of your ass for the day…is nothing but bullshit.

Okay, moving on to the purpose of this post…Look at this CRAP:

Oooookay…so now gay people are not just gay, they are also perverts?!…

Less gays, still so many idiots….

The only good thing about the Orlando Shooting is that it was a gay club. So less gays in the world today. — Pkay (@peterkaweesi) June 12, 2016

Oh, good for this guy, he went with the gay, Muslim, democrat angle….okay we get it, you hate everyone!

Man I don’t know what’s better that fact that gays were killed or the fact that the killer was Muslim and a Democrat. #Orlando#Shooting — Don Juan (@Jesushatesfig) June 12, 2016

This is a church!!!!!! OMG Jesus does love you the way you are, straight, gay, bi, transgender, murderer, rapist……He loves you…what bible are these people reading!

#LGBTQ has hands DRIPPING with #Pulse

#shooting blood w/their “God loves me how I am” lie. https://t.co/c9uQuurhWBpic.twitter.com/1Uc6OLSdBh

Just to clear the air here…this whole post is one big pre-meditated sin. I am judging the actual shit out of these people who are anything other than saddened by this event and by how disgusting the world is today.

I am judging the actual shit out of these people who are anything other than saddened by this event and by how disgusting the world is today. Click to Tweet
We people have screwed this world up, Jesus help us!

This post contains affiliate link, you can read my full disclosure here!