Essential Oils and
The FDA

Why Essential Oils Will Never Be FDA Approved For Medical Purposes - There is big healing in essential oils but there isn't big money in them!

Why Essential Oils Will Never Be FDA Approved For Medical Purposes

Why Essential Oils Will Never Be FDA Approved For Medical Purposes

What does one have to do to get their drug approved through the FDA? Well, believe it or not, it depends on the amount of money you can spend! But before getting into that, let me tell you the “extensive” process, used by the FDA, to approve a new pharmaceutical drug…

The FDA must spend a significant amount of time on this review right…..


Depends, how much money do you have?

See, the FDA has what they call, expedited approval programs. Yes, you read that right, the FDA had a system in place they felt necessary for reviewing drugs before approving them, but it was a long one so they found a way to make more money and speed up the process…I’m sure this is just as thorough…excuse my sarcasm.

The U.S. Food and Drug Administration’s (FDA) expedited approval programs – also referred to as fast-track programs ­­– give doctors and patients quicker access to new drugs and devices that are sorely needed to treat a number of health issues. This is called the Prescription Drug User Fee Act (PDUFA).

PDUFA changed the way drugs can be approved and sped up the process by giving the FDA more money to “increase staff.” Prior to the law, FDA funding came only from the U.S. government. The process often took so long that drug companies complained that FDA delays cost them money(Uh oh, we don’t want drug companies make less money). For the first time, the agency began taking fees from the very companies whose drugs they were tasked to review. While this provided the struggling agency with funding to get more work done, some experts worried about a conflict of interest (ya think).

Lets break that down…

The FDA was slow and only got money from the government. The drug companies weren’t making the maximum amount of money possible because the FDA was slow. So, the FDA made a program that allowed the drug company to PAY the FDA to do their work…faster…Seems legit! 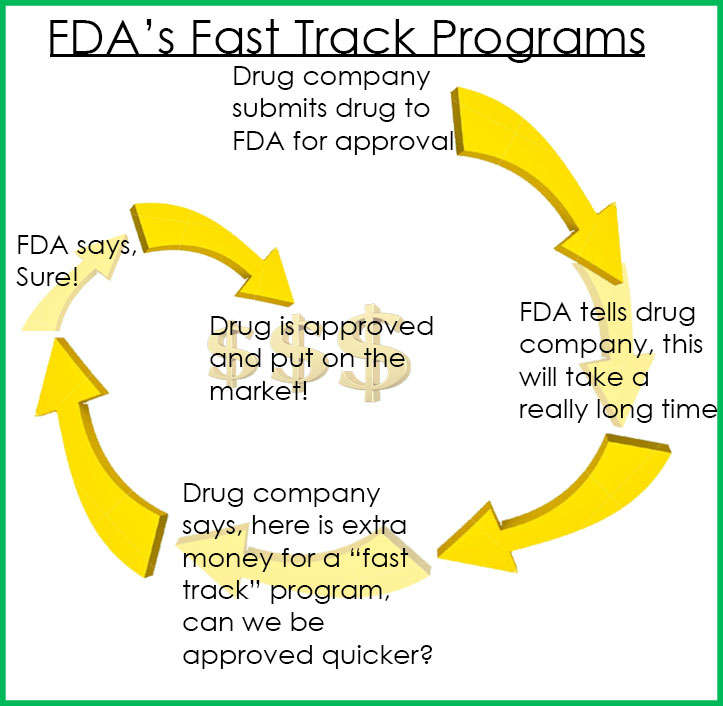 The FDA recently ran into a problem…

Pharmaceutical companies are losing big money as researchers show what humans have known for a long time: by improving our health through diet, exercise, and natural remedies, we can avoid most reasons to go to the doctor and consume both over-the-counter and prescription drugs. ~Activist Post

Uh oh….bad news for all of those companies profiting off of our illnesses! 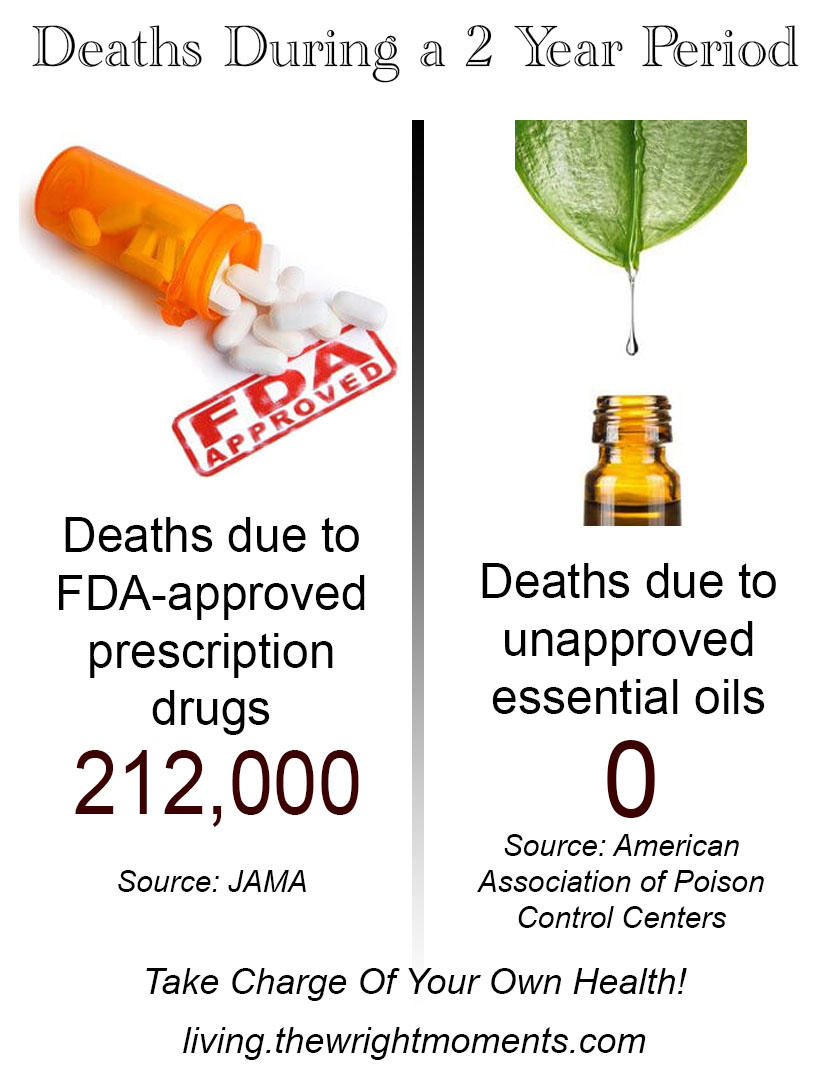 If essential oils are so great, why hasn’t everyone moved to them?

Aromatic plant oils precede medicine and pharmaceutical products by thousands of years. The National Institutes of Health’s website has published thousands of peer-reviewed studies proving the benefits of these oils. There is big healing, but not big money in essential oils. 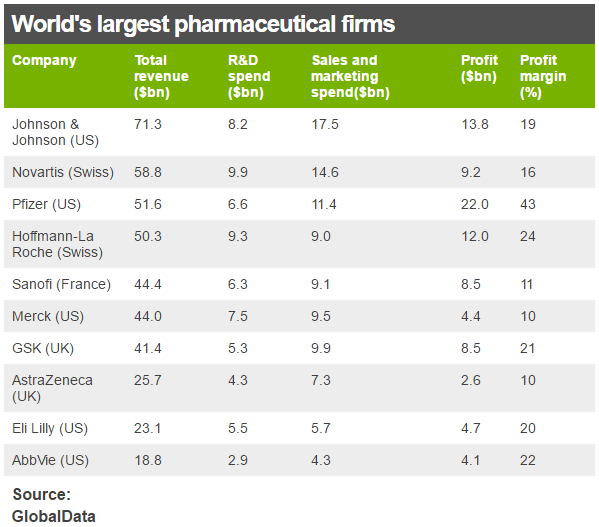 Why isn’t there big money in Essential Oils?

You can not patent a plant! Paying for an FDA study for a product that anyone can create at home is out of the question!

Essential oils are wholly natural and cannot be patented.

This means that you’ll never see an essential oil in a pharmaceutical drug. As such, you can expect that the vast majority of mainstream healthcare practitioners will never recommend essential oils as therapeutic alternatives to drugs. More importantly, because essential oils cannot be patented, drug companies will not waste money studying them.

Look at these numbers: 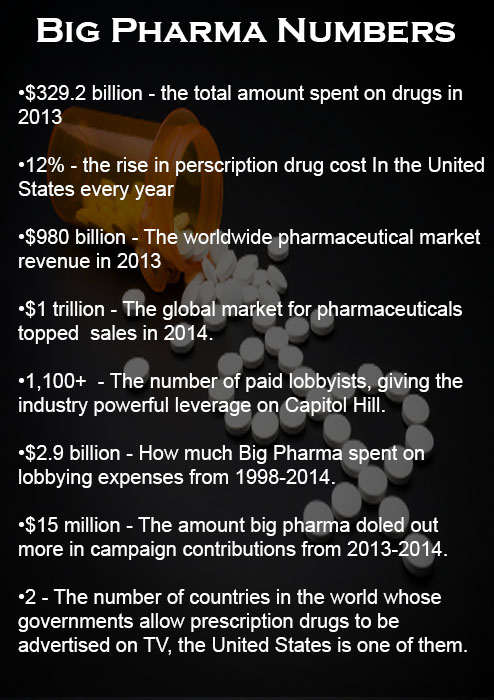 Research, research, research! Make decisions for yourself, don’t rely solely on what Big Pharma tells you. Remember they are being paid to speed this process up! Essential Oils will not make their way through the FDA approval process because there just isn’t enough money in it. Take charge of your own health and rely on your own judgment and research instead of relying solely on the research from those people making the money! Read all sides of everything, then come back to me and let me know you’re ready to take charge of you families health!

Essential Oils are one of many ways I have chosen to take charge of my families health, but it is not the only way! Changing out your toxic cleaning products and personal products is just as important. I still take my kids to the doctor, but we go for the holistic approach to fix their aliments first. If I don’t see improvement, then I will in fact buy that prescription drug the doctor offered! I feel fortunate to live in a country that has access to modern medicines because they can save lives…but when you jump to them for every little thing, it becomes more of a danger than an aid!

Take charge of your own health!