All in all, this was a great science lesson. The kids learned all about carbon dioxide, sublimation and different reactions they could get with the simple change of a container size. They learned about safety and how to plan ahead. They got some reading in because they wanted to know how dry ice is made and most importantly we made everlasting memories for us all!

Joshua is very interested in science. He watches and learns about science for hours each day. As an unschooling family, we allow them to learn what they want, when they want to! His passion for science has grown significantly since we made our transition from homeschooling to unschooling. So, it is my husband’s job to feed this science interest of Joshua’s! Today they chose dry ice. He came home with a big block of dry ice and Joshua was really excited. He has watched a ton of videos about the fun you can have with dry ice so he knew this would be good.

First we talked about not touching it and why. Then we talked about what it is. It is sometimes referred to as “cardice” and is the solid form of carbon dioxide. At pressures below 5.13 atm and temperatures below −69.5 °F, CO2 changes from a solid to a gas with no intervening liquid form, through a process called sublimation. The opposite process is called deposition, where CO2 changes from the gas to solid phase (dry ice). At atmospheric pressure, sublimation/deposition occurs at−109.3 °F.

Then the fun started! Here are the 6 projects we did and how we did them! 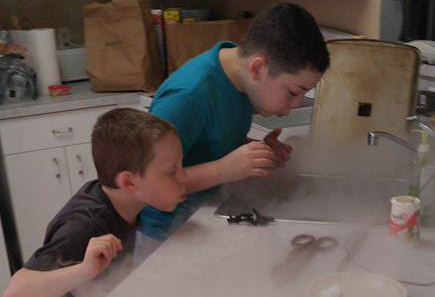 1. First we started with simply putting it in the sink and turning the water on to make the “smoke”.

The kids sat there blowing on it, putting their hands in it and swirling it around to make a tornado like effect. 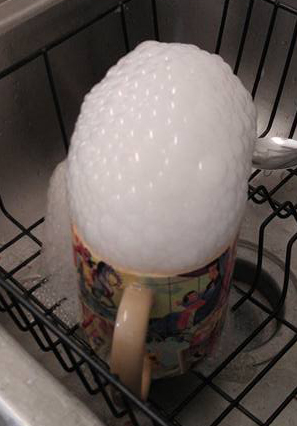 2.Then David put soap and water in a coffee cup and dropped a piece of dry ice into it for this really cool bubble fountain!

This one even sounded cool, it was just a continuous fountain of bubbles! 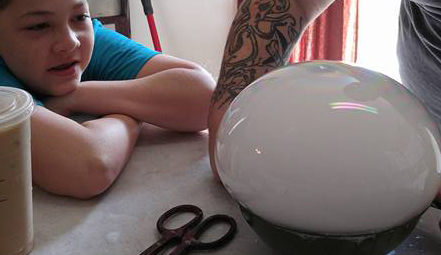 Then David put dry ice and water in a bowl and found a towel just big enough to cover the bowl long ways. He added soap and water to the towel and slid it across the bowl until it created this awesome bubble on top. The bubble just grew and grew and grew! 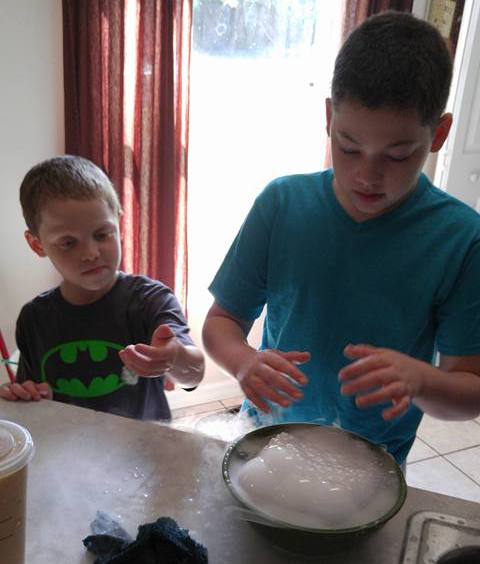 4. Once we were done with the big bubble, the kids started playing with the left over bubbles.

They were watching them skip between their fingers and they loved popping them and watching the smoke come out! 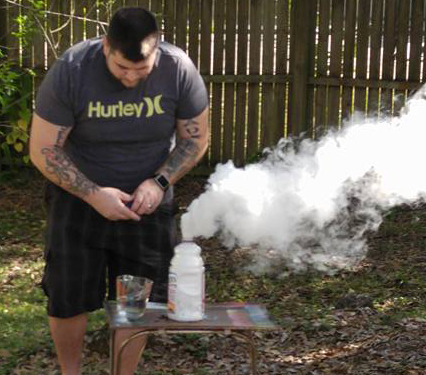 5. Then we stepped up our game with some dry ice bombs….this is super dangerous! Me and the kids waited in the porch and David ran into the porch after screwing the lid on the bottle. They put dry ice and water in an old juice bottle and screwed the lid on. The pressure makes the bottle explode. We did this with a juice bottle, a milk bottle and some water bottles. The water bottles were the loudest, the milk bottle was not impressive and the juice bottle was awesome!

This Juice bottle was a little more awesome than I expected actually. I knew it was going to explode and fly and be loud…but I still didnt really see it coming! As you can see in the video, I was startled enough to jump and drop my phone!

All in all, this was a great science lesson. The kids learned all about carbon dioxide, sublimation and different reactions they could get with the simple change of a container size. They learned about safety and how to plan ahead. They got some reading in because they wanted to know how dry ice is made and most importantly we made everlasting memories for us all!